Gave enough for 1,755 LLINs that will protect some 3,200 people when they sleep at night. 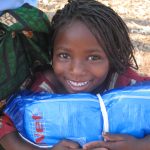 AMF protects people from malaria. They fund anti-malaria nets, specifically long-lasting insecticidal nets (LLINs), and work with distribution partners to ensure they are used. They track and report malaria case rate data. More than a million people die from malaria every year.

The most effective means of preventing malaria is sleeping under a mosquito net, specifically a long-lasting insecticide treated net (LLIN).

Malaria is transmitted by certain mosquitoes when they bite. These mosquitoes bite people to get a blood meal. The malaria parasite then passes from the infected mosquito to the person being bitten. They typically bite between 10 o'clock at night and two in the morning - and that's one of the most important things we have on our side: if we can protect people in affected areas when they sleep at night we have a very good chance of preventing them contracting malaria.

LLINs work in two ways. First, as a simple mechanical barrier. Second, as a mechanism for killing the mosquito: when a mosquito lands on a net it picks up insecticide on its legs that causes 'knock down' - the mosquito is killed. The nets remain effective even when they have holes and tears in them, as happens in the environments in which they are used and over time, as mosquitoes land on a net first rather than passing directly through any hole that might be there. That allows knock down to occur and means the nets, even with holes, stay 99% effective. With AMF, 100% of public donations buys nets. AMF links every donation they receive to a specific distribution so donors can follow exactly where the nets they fund are distributed. The world’s leading three independent charity evaluators, GiveWell in the US, Giving What We Can in the UK and The Life You Can Save in Australia, all rank AMF as the world’s most effective charity – of any charity, in any sector! In April 2013, 100 people giving 1% gave enough for 1,755 LLINs that will protect some 3,200 people when they sleep at night.