Now feeding over 1,150 children every school day in Malawi, Liberia and Haiti 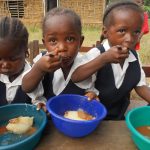 Our fundraising this month is for a primary school in Liberia with our charity partner Mary's Meals. This will mean we are now providing school meals in 5 schools across Malawi, Haiti and Liberia. Liberia currently stands as the sixth worst country in the world for hunger. The challenges facing the country after civil war (which ended in 2003) are enormous. As one of the poorest countries in the world (with a GDP per capita of just US$135) food insecurity is widespread. There is a 39% prevelance of chronic malnutrition in children under 5. Mary's Meals has worked in Liberia for over 10 years, first introducing school sponsorship in 2004. They are now reaching over 81,000 children in Liberia but the need is still there to expand their programmes. Be One Percent's fundraising continues to grow alongside the work of Mary's Meals who are now feeding over 755,000 children worldwide. It costs just £19 to feed a child in Liberia for an entire school year. Our network this month will raise enough to feed an entire school, this means we are now feeding 1,161 children every school day with Mary's Meals.

Mary’s Meals is an international movement that sets up school feeding projects in communities where poverty and hunger prevent children from gaining an education. The charity now feeds 2,058,099 children every school day and it costs just £15.90  to feed a child for a school year. We sponsored our first school with Mary’s Meals in 2011 and have been working with them ever since.