Helping Marys Meals reach over 80,000 effected by the ebola outbreak in Liberia 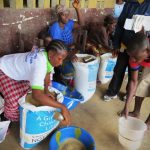 Mary’s Meals is delivering food aid to thousands of people affected by the Ebola outbreak in Liberia – including patients infected by the deadly virus – following the launch of a new emergency relief effort. Under normal circumstances, Mary’s Meals reaches more than 128,000 impoverished children across Liberia each day, attracting them to the classroom with a nutritious meal in school. However, the recent crisis has brought a temporary halt to the charity’s feeding programme in the country, with all schools now closed. Striving to make effective use of its resources, expertise and significant community standing in Liberia, Mary’s Meals has now launched an emergency response to the Ebola outbreak by distributing food to children in their homes. Moreover, Mary’s Meals is reacting quickly to requests from embattled health care workers to provide much-needed food aid to suspected Ebola sufferers. Meals are being distributed at three holding centres in the townships of Tubmanburg, Robertsport and Brewerville. “We have been working in Liberia since 1997 at the height of the country’s hideous and terrifying civil war,” said Magnus MacFarlane-Barrow, Mary’s Meals’ founder and CEO.  The Mary’s Meals crisis response has already seen up to 80,000 children receive emergency food rations in their homes and is focused on two counties, Grand Cape Mount and Bomi – both of which have been cut off from the capital Monrovia by military blockade. The money raised by Be One Percent this month will support this important work. The state of emergency declared by Liberian President Ellen Johnson Sirleaf has led to the establishment of quarantined zones and the restriction of people’s movements. As a result, there have been widespread reports of soaring food prices, increased hunger and a general rise in food insecurity across the region. Mary’s Meals staff on the ground are working closely with community leaders to deliver and monitor the emergency food distribution programme. They are also routinely giving best practice information and advice on preventing infection from the Ebola virus. At least 2,200 people infected with Ebola have died so far this year across Liberia, Guinea, Sierra Leone and Nigeria, with Liberia suffering the most hardship by far. The World Health Organisation has declared the crisis an international health emergency.

Mary’s Meals is an international movement that sets up school feeding projects in communities where poverty and hunger prevent children from gaining an education. The charity now feeds 2,058,099 children every school day and it costs just £15.90  to feed a child for a school year. We sponsored our first school with Mary’s Meals in 2011 and have been working with them ever since.